skip to main | skip to sidebar

Finally got Graphics into a hand-in-able state over the weekend. And just in time since I finally received my copy of Unreal Tournament 2004 yesturday too, so I lost most of the afternoon/night to online Onslaught. Buy this game if you have a half-decent PC and broadband connection! I might try and make some maps over the summer, which I have started doing a few times for other games and stopped. Could be useful for Full Sail though, and the old portfolio. I'll have to have a search around for tutorials on other stuff like weapons and maybe make a mod.
In unrelated news, I found my Nintendo DS image on another website; The Edge Forums (well, the unofficial one - rllmuk, since the real one shut ages ago.) Here it is.
Posted by Ashley Bennett at 10:56 am No comments:

Graphics is still doing my head in. I seem to have my head around most of it and the program should be working, but I'm getting some strange errors. Bum. But in the meantime, I've just uploaded a Flash demo as a part of my final project. A nice, easy, 'whack-a-mole' style game. There are also two papers on there too, one of which I have submitted to the Education Arcade for their essay competition to try and win a studentship to E3 2004!
Posted by Ashley Bennett at 10:24 pm No comments:

I've been found out by Gizmodo! They weren't happy, but I appologised and its ok now. Aaaaaanyways, I've been a busy Photoshopper and B3tan tonight:

I thank you.
Posted by Ashley Bennett at 9:07 pm No comments:
HAHAHA! Gizmodo took the bait!
Now to try Gamespot and IGN!
Oh and I forgot to mention, this is based on recently leaked info (see here, near the bottom) to add credibility to my image, both in terms of accuracy and timing. Nice.
Posted by Ashley Bennett at 3:49 pm No comments:
To further excite the rumour mill around Nintendo, I have just created a concept image of the new Nintendo DS handheld console. I've sent it to a Gizmodo, a gadget blog, who are offering a real DS as a prize for the first real image they get, so it is bound to be published. I claimed it was leaked by an intern at the printing company who are doing their brochers for E3!
I also showed it to a friend of mine, who had this to say (name changed to protect the gullible):

Oh, and here it is (click to enlarge in new window): 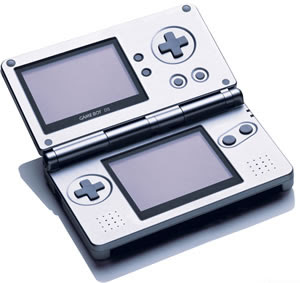 Posted by Ashley Bennett at 3:19 pm

It's been a long time since I mentioned it, (but then a long time since I did any work on it) but here is a link to see a work-in-progress version of the new style CreateUK. I'm importing all of the content so it should be easier for me to update than having it all in the flash file itself. I've been researching pulling this blog into the flash site, rather than having to read it on a separate page. This would be the next step, followed by porting the old content and then making some jazzier transitions/ adding bells and whistles. If it goes any further that is, since this is really just a learning exercise... using components, importing text and other media, XML, some ActionScript practice etc. Any thoughts?
Posted by Ashley Bennett at 8:27 pm No comments:
I've just had the results back from the US Embassy and we are definitely accepted now. Woo! Back here though, I have written some more essays and things for various modules. I should really start posting stuff like that on CreateUK.
Also, (I've just had a quick flick back through the last few posts and don't think I've said this yet,) I've noticed that GMTV have changed my website slightly. Basically it looks like they have got some new presenters and so have updated the graphics to include them. Problem is they don't seem to be able to use Photoshop and have just left them as full colour square headshots rather than the faded blue ones I had in the background. There may be a few other bits too, like making the pages totally white with no separations with yellow sections, but that is all I have seen. Rubbish! ;-)
Posted by Ashley Bennett at 10:03 am No comments:

It was my lil' brothers 18th Birthday yesturday, (Happy Birthday boy-o,) and a good time was had by all. I whupped everyone's arse at go-karting, posting a supurb time of 44.46 seconds and flying around the most laps. I did have one spill when I had to brake sharply whilst attempting to overtake someone again right at the end, which resulted in a 180' spin. Then one of Chris' mates, who came careering around the corner behind me, saw me late and side-swiped me whilst trying to brake and avoid me. I now have a nice bloody, purple bruise on my right hip. Mmmm.
Still, I also managed to get a load of work done on my GBA project. Expect a decent look at the theory behind the project to be posted soon, since most of it is written. I have also emailed the organiser of the Serious Games Summit at the Game Developer Conference in San Jose, California, to try and get some input on my work and try and score some resourses from the show. I've noticed E3 is hosting something by The Education Arcade, so I'll try and email them too.
Posted by Ashley Bennett at 5:28 pm No comments:

Got accepted to Full Sail, so that's all sorted, if I haven't said before. Also now got my Visa from the US Embassy today with my brother. Well, they still need to send it through, but the woman said everything looked fine so all is good.
Got my GBA project mentioned on GBA Dev'rs and GBADev too. Gonna try getting some industry people to take a look next.
Posted by Ashley Bennett at 7:29 pm No comments:

Let's see if I can start a major rumour in the gaming world with a theory I just had about Nintendo's future hardware, (the main home console unit.)
Nintendo president Satoru Iwata talking about the forthcoming 'DS' handheld console, tried to play down expectation of the DS as a powerful next gen console, urging that people appreciate that "it is a 'unique' machine, so not everybody will understand it right away." He has recently made the following comment about it:
"There might only be 10 to 15 people applauding during its unveiling at E3, but they'll understand it once they touch it. At the least, it should serve as a hint towards [our] next-generation console."
So here comes my rumour / theory: Nintendo's next gen console, 'N5', will be a tablet style device. A bit big to carry around all the time, but you could if you wanted to, like a tablet PC or laptop. They could be linked to allow multiplayer games with some sort of wireless technology like 54mb/s WiFi, or used as separate screens for a single player, like a dual monitor PC, or indeed the 'DS.' By having one screen simply as a menu screen, such as a weapon select or HUD, the rest of the processing power could be used to do work for the other screen, effectivly doubling the power available to chug through game data by implementing parrallel processing.
Sound good? Guess I should knock up a nice 3D interpretation and get this printed ;-)
Posted by Ashley Bennett at 10:56 pm No comments:
Newer Posts Older Posts Home
Subscribe to: Posts (Atom)

Update 23-May: Note that the Cardboard SDK has now been replaced with the GoogleVR SDK . In most cases you can simply replace Cardboard wit...

Ashley Bennett
A Technical Project Manager for EA Mobile at Electronic Arts, currently working out of the Redwood Shores, CA. Credits include titles in the Need for Speed, Medal of Honor and Battlefield franchises among others.
www.HiAsh.com
VR Portfolio